Ryan Wins VP Debate Against Biden Despite Being Double Teamed 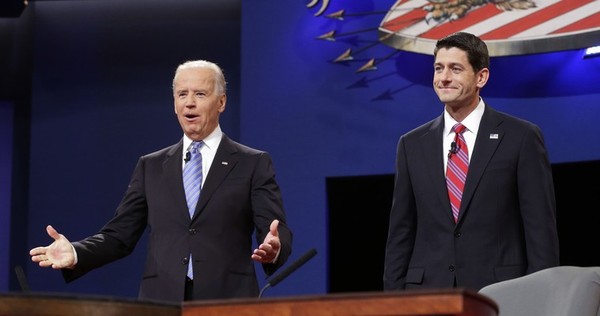 In the one and only Vice Presidential debate in this election, there was one thing that was remotely clear, Vice President Joe Biden and Congressman Paul Ryan came to fight. Unfortunately, Ryan had to fight two opponents, Biden and the moderator from ABC Martha Raddatz. Worse yet, was the format with the deck stacked against Ryan who was constantly interrupted by Biden. Yes, Biden was rude, arrogant and condescending. What else could you expect from Crazy Joe?

The debate started out with a question about Libya and Paul Ryan was clear in mentioning how the Obama administration failed to protect not only Ambassador Chris Stevens and 3 other Americans that were killed in Benghazi.  While Ryan clearly had the facts of the case, Biden was quick to blame that it was the intelligence community that didn’t get the facts straight in making it clear that was a planned terrorists. He tried to state that the White House had no requests of additional security from our consulate in Benghazi. He also tried to blame Ryan and other member of Congress in not voting to give Obama more money to add security at all US installations across world. Clearly, Biden tried to take the heat off Obama when it came to discussing the politics and problems in the Middle East. When in doubt, play the blame game like your boss has been doing for almost 4 years.

Despite all the smirking, laughing and rudely interjecting himself in the middle of Ryan’s talking points, Biden showed just how obnoxious he can be. Instead of reminding Biden about his rudeness Ryan was patient and more professional in the debate. When the debate turned to the economy and jobs, Ryan clearly laid out what the plans that a Romney administration would be. Despite pointing out the number of Americans out of work and Obama adding more debt, Biden would often laugh showing just out of touch he is with the average person. Biden mentioned that the Obama administration created 5 million jobs but yet none of them were in this country. Overall, Biden repeated the same misinformation and spin that the Obama administration is famous for.

The debate format was terrible and the moderator was clearly on Biden’s side leaving Ryan to face not only one opponent but Raddatz as well. She often would cut off Ryan and allow Biden to do so as well. When it came to the facts, Ryan clearly had them and was as direct as he could possibly be. Despite his condescending nature, Biden did have a bit better performance than Obama did in the first presidential debate. Ryan still gets the win in this debate but there wasn’t a knockout blow. It’s too early to tell how this debate would resonate with the American people. Ryan could’ve countered Biden’s bullying approach but took a higher ground. There was no knockout punch in this debate but in the war on facts one thing is obvious, Biden came unarmed.

One other big point was Raddatz mentioning how a lot of the country was concerned about religion and abortion and wanted to know the candidates views on the issue. It wasn’t the country that wants to hear about that, it seemed like it was more Raddatz. The abortion issue and of course religion are issues that are least on the country’s mind right now. But to her credit, at least we didn’t hear about Big Bird. Of, course the cats are sure waiting to take care of him.

Next up is the second presidential debate on August 16th at Hofstra University in Hempstead, New York.